A compound noun is a fixed expression which is made up of more than one word and functions as a noun. Such expressions are frequently combinations of two nouns, e.g. address book, human being, science fiction. A number of compound nouns are related to phrasal verbs and these are dealt with in Unit 14.
Compound nouns may be written as two words, e.g. tin opener, bank account, or they may be written with a hyphen instead of a space between the words, e.g. pen-name, baby-sitter. . – – –
Some expressions are occasionally written with a hyphen and occasionally as two separate words. For instance, both letter box and letter-box are correct. Sometimes they may be written as one word, e.g. earring.
Compound nouns may be countable, uncountable or only used in either the singular or the plural. There are examples of each of these types below. Check that you understand the meanings of each of the expressions listed. If you understand both elements of the expression, the meaning will usually be clear. If the meaning is not fairly obvious, then it is provided below.
Usually the main stress is on the first part of the compound but sometimes it is on the second part. The word which contains the main stress is underlined in the compound nouns below.
Here are some examples of common countable compound nouns.

A large number of compound nouns (see Unit 13) are based on phrasal verbs. In Sections B to E you will see a number of examples of such nouns in context. The meaning of the compound noun is indicated in brackets at the end of the sentence. To form the plural, ‘s’ is added to the end, e.g. pin-ups.
Nouns based on phrasal verbs often have an informal feel to them and they are particularly common in newspaper reporting. Here are examples of such nouns in use.
In response to the pay offer, there was a walk-out at the factory. [strike] There is going to be a crack-down on public spending. [action against]
There has been a break-out from the local prison. [escape]
Last month saw a tremendous shake-up in personnel. [change]
1 never expected the break-up of the USSR. [collapse]
A number of these nouns have economic associations.
The takeover of one of our leading hotel chains has just been announced. [purchase by another company] We’re trying to find some new outlets for our products. [places to sell]
Take your things to the check-out to pay for them. [cash-desk]
Cutbacks will be essential until the recession is over. [reductions]
We made a profit of £1000 on a turnover of £10,000. [money passing through a
company]
Some of these nouns are associated with technology and other aspects of contemporary life.
What the computer produces depends on the quality of the input. [information that is
put in] Output has increased thanks to new technology. [production]
We have a rather rapid staff turnover. [change] Just after leaving school he went through the stage of being a dropout. [person who rejects society]
It will be a long time before the consequences of fallout from Chernobyl are no longer felt. [radio-active dust in the atmosphere]
I can easily get you a printout of the latest figures. [paper on which computer information has been printed]
A breakthrough has been made in AIDS research. [important discovery]
Some of the words can be used in more general circumstances.
Many of the problems were caused by a breakdown in communications. [failure]
The outlook for tomorrow is good – sunny in most places. [prospect]
There are drawbacks as well as advantages to every situation. [negative aspects]
The outcome of the situation was not very satisfactory. [conclusion]
TV companies always welcome feedback from viewers. [comments]
It was clear from the outset that the set-up would cause problems. [start; situation]
We parked in a lay-by on the by-pass. [parking space at the side of a road; road avoiding the centre of a town]
The outbreak of war surprised them. [start of something unpleasant, e.g. disease, violence] Words with interesting origins – people and places
A number of words in English have originated from the names of people. biro: [ball-point pen] named after Laszlo Biro, its Hungarian inventor boycott: [ifuse to dial with or a refusal to deal with] after a landlord in Ireland who made himself unpopular by his treatment of his tenants and was socially isolated braille: [name of a raised writing system used by blind people] from the name of its
French inventor, Louis Braille chauvinist: [strong belief that your country or race is superior to others] after the Frenchman, Nicolas Chauvin, who was fanatically devoted to Napoleon
hooligan: [a rough, lawless youth] from the Irish family name, Hooligan machiavellian: [cunning, deceitful, unscrupulous in the pursuit of a goal] from Niccolo Machiavelli, the Italian statesman who died in 1527 mentor: [loyal and wise adviser] from Mentor, friend to Odysseus pamphlet: [a small leaflet] from a character Pamphilus, in a 12th century love poem to pander: [to indulge someone’s desires] from Pandaros, a procurer or pimp in Ancient Greek mythology saxophone: [musical instrument] invented by the Belgian, Adolphe Sax tawdry: [cheap and tasteless] from St Audrey, at whose annual fair in the town of Ely, near Cambridge, cheap gaudy scarves were sold watt: [unit of power] from the 18th century Scottish

Words with interesting origins – from other languages

English has taken over words from most of the other languages with which it has had contact. It has taken many expressions from the ancient languages, Latin and Greek, and – – these borrowings usually have academic or literary associations. From French, English has taken lots of words to do with cooking, the arts, and a more sophisticated lifestyle in general. From Italian come words connected with music and the plastic arts. German expressions in English have been coined either by tourists bringing back words for new things they saw or by philosophers or historians describing German concepts or experiences.
The borrowings from other languages usually relate to things which English speakers experienced for the first time abroad. – *Ame -* » * a, @ B There are borrowings from a wide range of languages. For example, from Japanese, tycoon, karate, origami, judo, futon and bonsai. From Arabic, mattress, cipher, alcove, carafe, algebra, harem, mufti and yashmak. From Turkish, yoghurt, jackal, kiosk, bosh [nonsense (colloquial)], tulip and caftan; from Farsi, caravan, shawl, taffeta, bazaar and sherbet, and from Eskimo, kayak, igloo and anorak.
C The map of Europe below shows the places of origin of some English words and expressions
borrowed from some other European languages. Use a dictionary to check the meanings of any words you are not sure about. 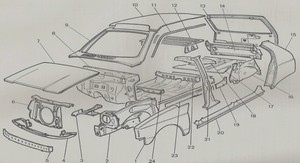